Dogs named Jackson tend to be good-natured, and loving. This name is also associated with intelligence, friendship, and companionship.

Jackson has two syllables, which is highly recommended by dog trainers. Jackson isn't one of the most common names, so your dog will certainly stand out. If you love the name, you should pick it!

Jackson is found in these categories:

Jackson is not a popular dog name. That's great if you like to stand out from the crowd!

Get special treats for Jackson! 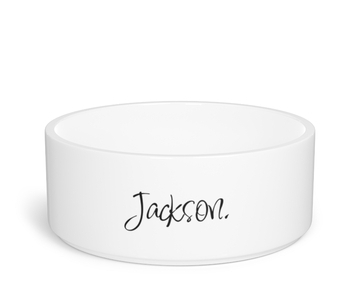 Got a dog named Jackson?

🇺🇸
Dave Clifford (Illinois, United States)
I just got a rescue dog named Jackson. I love the name. The one thing that I changed was the spelling. Originally, it was Jaxson. I like a dog name that kind of rings out when you are yelling at your dog. He is a black lab. I live next to a woods. So, I am probably going to have to yell out his name occasionally. It sounds to me like a Southern name. Stonewall Jackson?
June 18, 2022

🇺🇸
(Florida, United States)
Jackson is the name of my French bulldog
February 22, 2022

Let us know what you think of Jackson as a dog name!