If sport is your passion, why not give your dog a classic sporty name? These dog names are inspired by sports and famous athletes.

Planning to raise a lean machine? If you have an active breed, these athletic dog names will help to represent their speed, agility and zest for life.

As of January 2023, sporty dog names are trending down with new puppy owners. Our stats suggest that they are less fashionable than they were six months ago.

A dog whisperer from Virginia, United States 🇺🇸 browsed a list of Tibetan Spaniel Names.
less than a minute ago

Someone from Kentucky, United States 🇺🇸 browsed a list of Tibetan Spaniel Names.
1 minute ago

A pup lover from California, United States 🇺🇸 browsed a list of Dog Names Starting With E.
1 minute ago 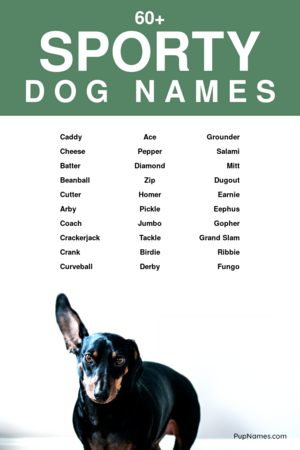 Let us know what you think of these sporty dog names!