an awkward and inexperienced youth

Traits associated with the name Rookie:

Dogs named Rookie tend to be loving, hard-working, and resilient. This name is also associated with companionship.

Is Rookie a good dog name?

Rookie has two syllables, which is highly recommended by dog trainers. The name also ends in a vowel sound, so it's easy for dogs to recognize. Rookie isn't one of the most common names, so your dog will certainly stand out. If you love the name, you should pick it!

Rookie is found in these categories:

Rookie is not a popular dog name. That's great if you like to stand out from the crowd!

Get special treats for Rookie! 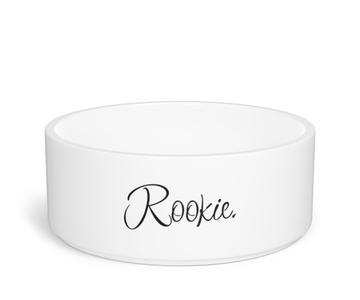 Rally
the feat of mustering strength for a renewed effort
Relay
electrical device such that current flowing through it in one circuit can switch on and off a current in a second circuit
Ribbie
Ripley
Sigourney weaver's character.
Rocky
Inspired by rocky balboa.
Rusty
Always slow-moving.
See more...

Got a dog named Rookie?

Let us know what you think of Rookie as a dog name!