One who performs yoga

Dogs named Yogi tend to be strong-willed, good-natured, loyal, and loving. This name is also associated with companionship, and empathy.

Yogi has two syllables, which is highly recommended by dog trainers. The name also ends in a vowel sound, so it's easy for dogs to recognize. Yogi is a widely loved dog name for good reason. If you like it, go for it!

Yogi is found in these categories:

Yogi is one of the more popular dog names out there. According to our data, Yogi outranks the great majority of names.

Get special treats for Yogi! 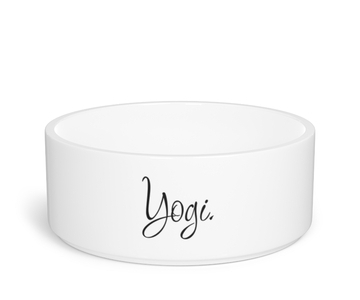 Got a dog named Yogi?

🇸🇬
Suhana (Central Singapore, Singapore)
I have a dog called yogi he is a black lab and is SO CUTE!!
June 15, 2022

🇵🇪
darwin mauricio pais peru (Lima, Peru)
yogi was a chow chow dog i will never forget him yogi guandamer a place just for you in heaven i am darwin
April 07, 2022 ◆ Translated

Let us know what you think of Yogi as a dog name!