Traits associated with the name Karma:

Dogs named Karma tend to be strong-willed, good-natured, loyal, and loving. This name is also associated with companionship, and empathy.

Is Karma a good dog name?

Karma has two syllables, which is highly recommended by dog trainers. The name also ends in a vowel sound, so it's easy for dogs to recognize. Karma isn't one of the most common names, so your dog will certainly stand out. If you love the name, you should pick it!

Karma is found in these categories:

Karma is not a popular dog name. That's great if you like to stand out from the crowd!

Get special treats for Karma! 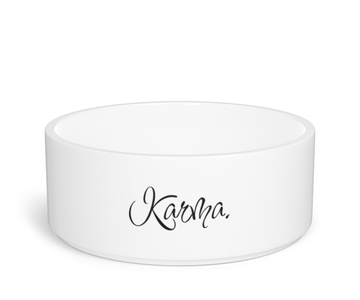 Got a dog named Karma?

🇺🇸
Tara (Pennsylvania, United States)
Karma is my goldendoodle’s name. You don’t want a name that is too close in sounds to commands you will have your pup learn. Karma and come are quite similar however my dog understands the difference fortunately! Plus I love her name it suits her.
January 06, 2022

Let us know what you think of Karma as a dog name!