Dogs named Caesar tend to be good-natured, loyal, loving, and brave. This name is also associated with friendship, and companionship.

It suggests that you have an appreciation for history and a fondness for strong, powerful names. It could also indicate that you have a strong sense of loyalty and respect for authority.

Caesar has two syllables, which is highly recommended by dog trainers. Caesar isn't one of the most common names, so your dog will certainly stand out. If you love the name, you should pick it!

Caesar is found in these categories:

Caesar is not a popular dog name. That's great if you like to stand out from the crowd!

Get special treats for Caesar! 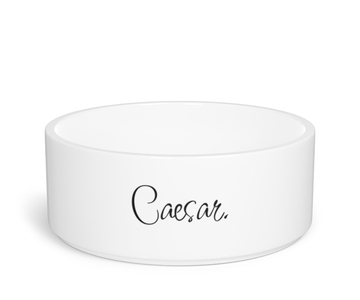 Chewie
Chewbacca's nickname in the star wars franchise.
Clifford
From the ford by the cliff
Carter
One who transports goods by cart or wagon.
Chester
A Fortress, Camp
Chewy
(of a consistency) requiring chewing
Chico
Diminutive form of Francisco; means small, boy or child.
See more...

Got a dog named Caesar?

Let us know what you think of Caesar as a dog name!