If you're a rocker, a DJ or a classical connoiseur, these musical dog names might just be perfect for your dog. There are tuneful choices in a range of musical styles that will help your pup to stand out!

Staying on the musical theme, these names mean song or are in some way related to the word.

Staying on the musical theme, these names mean singer or are in some way related to the word.

As of February 2023, Musical Dog Names seem increasingly popular with new puppy owners. Our stats show that they are more fashionable than they were six months ago.

A pup lover from Texas, United States 🇺🇸 browsed a list of Hunting Dog Names.
less than a minute ago

A pup lover from Hawaii, United States 🇺🇸 browsed a list of Hunting Dog Names.
less than a minute ago

A pup lover from Antioquia, Colombia 🇨🇴 browsed a list of Celestial Dog Names.
1 minute ago

Someone from Virginia, United States 🇺🇸 browsed a list of Beautiful Dog Names.
1 minute ago
A dog whisperer from Central Singapore, Singapore 🇸🇬 searched for Oops.
1 minute ago 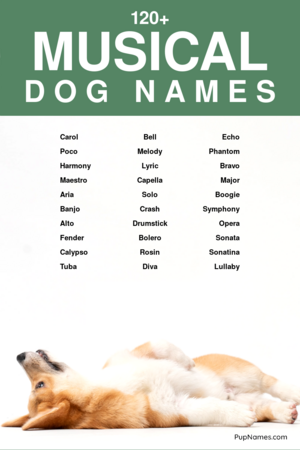 Let us know what you think of these Musical Dog Names!