Messenger or earthly, from the name Hermes

Dogs named Hermione tend to be strong-willed, industrious, affectionate, and loving. This feminine name is also associated with intelligence, and companionship.

Hermione has two syllables, which is highly recommended by dog trainers. The name also ends in a vowel sound, so it's easy for dogs to recognize. Hermione isn't one of the most common names, so your dog will certainly stand out. If you love the name, you should pick it!

Hermione is found in these categories:

Hermione is not a popular dog name. That's great if you like to stand out from the crowd!

Get special treats for Hermione! 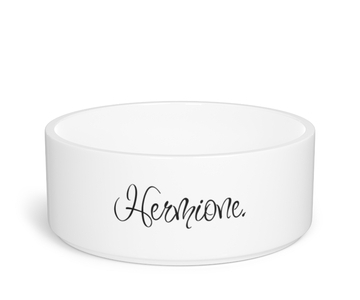 Chloe
Daphnis and chloe, is an ancient greek novel
Daphne
The very intelligent character from scooby doo
Phoebe
A titan goddess with the gift of prophecy in greek mythology
Harmony
Concord, unity
Diana
The goddess of hunting in roman mythology
Hera
The queen of the gods and is the wife and sister of zeus in greek mythology
See more...

Got a dog named Hermione?

Let us know what you think of Hermione as a dog name!