Dogs named Nellie tend to be strong-willed, good-natured, industrious, and loving. This feminine name is also associated with intelligence, and companionship.

Nellie has two syllables, which is highly recommended by dog trainers. The name also ends in a vowel sound, so it's easy for dogs to recognize. Nellie isn't one of the most common names, so your dog will certainly stand out. If you love the name, you should pick it!

Nellie is found in these categories:

Naming your dog Nellie is certainly a thing, but it's one of the more niche choices out there according to our data.

Get special treats for Nellie! 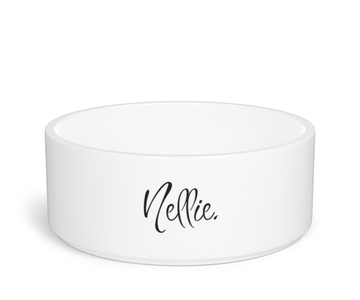 Bella
Beautiful; short for Isabella.
Daisy
Day's eye. The petals of a daisy open during the day, revealing its yellow centers, and then close at night.
Dottie
Lady
a woman of refinement
Lola
Sorrows
Lucy
Light
See more...

Got a dog named Nellie?

🇺🇸
Nora (New Jersey, United States)
My friends had a black mixed breed named Nellie. The name really suited her, as she was a unique and sweet dog.
July 09, 2022

🇬🇧
Suzanne Bristow (England, United Kingdom)
My black labrador is Nellie. No one ever says it's a nice name but ut really suits her because she is loving, clever, feminine and strong. It is very unusual too and represents exquisite characters in history.
March 30, 2022

Let us know what you think of Nellie as a dog name!