A cocktail that's made with rum, CuraÃ§ao liqueur, orgeat syrup and lime juice.

Dogs named Mai Tai tend to be good-natured, and loving. This name is also associated with friendship, and companionship.

It suggests that you have a fun and creative personality and enjoy tropical drinks.

Mai Tai has two syllables, which is highly recommended by dog trainers. The name also ends in a vowel sound, so it's easy for dogs to recognize. Mai Tai isn't one of the most common names, so your dog will certainly stand out. If you love the name, you should pick it!

Mai Tai is found in these categories:

Mai Tai is not a popular dog name. That's great if you like to stand out from the crowd!

Get special treats for Mai Tai! 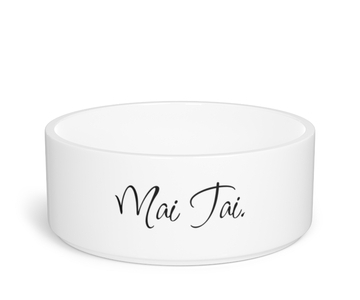 Marley
Pleasant seaside meadow
Maple
Species Of Tree In The Acer Genus
Mimi
Faithful guard
Minnie
Of The Sea Or Bitter
Mocha
a superior dark coffee made from beans from Arabia
Moxie
Verve, vigor or courage. the origins of the term are from an american soft drink, trademarked as ''moxie.''
See more...

Got a dog named Mai Tai?

Let us know what you think of Mai Tai as a dog name!