A wookiee warrior in Star Wars.

Dogs named Chewbacca tend to be loving, brave, and hard-working. This name is also associated with intelligence, and companionship.

Chewbacca has more syllables than most dog names, but you can easily give your pup a nickname to shorten things. The name also ends in a vowel sound, so it's easy for dogs to recognize. Chewbacca isn't one of the most common names, so your dog will certainly stand out. If you love the name, you should pick it!

Chewbacca is found in these categories:

Chewbacca is not a popular dog name. That's great if you like to stand out from the crowd!

Get special treats for Chewbacca! 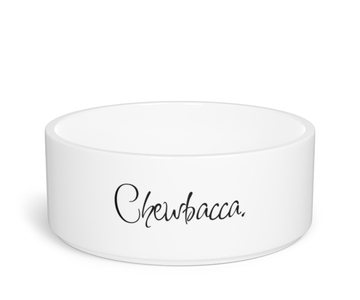 Chocolate
a medium brown to dark-brown color
Cookie
Small files that hold a modest amount of data specific to a particular client and website.
Constantine
Steadfast
Cisco
A technology company known for its networking products in the us.
Charity
One of the seven virtues
Chalupa
Specialty dish of south-central mexico
See more...

Got a dog named Chewbacca?

Let us know what you think of Chewbacca as a dog name!