Traits associated with the name Eternity:

Dogs named Eternity tend to be strong-willed, loyal, and loving. This name is also associated with companionship, and empathy.

Is Eternity a good dog name?

Eternity has more syllables than most dog names, but you can easily give your pup a nickname to shorten things. The name also ends in a vowel sound, so it's easy for dogs to recognize. Eternity isn't one of the most common names, so your dog will certainly stand out. If you love the name, you should pick it!

Eternity is found in these categories:

Eternity is not a popular dog name. That's great if you like to stand out from the crowd!

Get special treats for Eternity! 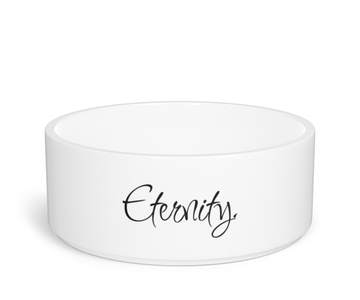 Enchilada
tortilla with meat filling baked in tomato sauce seasoned with chili
Esperanza
Hope
Ezra
Helper
Ernie
Earnest, serious
Edie
Short Form Of Edith
Muraqaba
Sufi word for meditation literally it is an arabic term which means 'to watch over', ''to take care of', or 'to keep an eye'
See more...

Got a dog named Eternity?

Let us know what you think of Eternity as a dog name!