Yoga brings us inner peace, exercise and healing of the mind. Give your dog a sense of zen by choosing one of these beautiful and spiritual yoga-inspired dog names.

As of December 2022, yoga dog names seem increasingly popular with new puppy owners. Our stats show that they are more fashionable than they were six months ago.

A dog whisperer from North Carolina, United States 🇺🇸 searched for Mabel.
less than a minute ago

A dog whisperer from California, United States 🇺🇸 browsed a list of Westiepoo Names.
1 minute ago

A pup lover from Veracruz, Mexico 🇲🇽 browsed a list of Black Dog Names.
1 minute ago 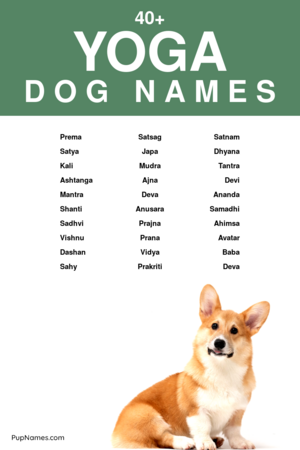 Let us know what you think of these yoga dog names!