Dogs named Lincoln tend to be strong-willed, good-natured, industrious, and loving. This name is also associated with intelligence, and companionship.

It suggests that you admire Abraham Lincoln and his legacy, and that you value qualities such as courage, integrity, and leadership.

Lincoln has two syllables, which is highly recommended by dog trainers. Lincoln isn't one of the most common names, so your dog will certainly stand out. If you love the name, you should pick it!

Lincoln is found in these categories:

Lincoln is not a popular dog name. That's great if you like to stand out from the crowd!

Get special treats for Lincoln! 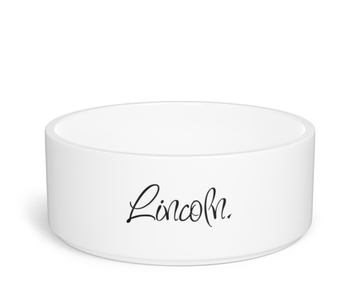 Got a dog named Lincoln?

🇺🇸
Wendy (Kansas, United States)
I named my charcoal Lab Lincoln. Before him I had a yellow lad named Reagan..Yes, there is a pattern. My two favourite presidents.
December 21, 2022

🇺🇸
Elah (Oregon, United States)
I'm actually going to get a service dog here in a couple of years hopefully going to be getting her from the humanes society or at least some kind of rescue and i'm going to hire someone to help me train her to be my first ever service dog she's going to be a standard poodle because some people in my family have allergies and poodles shed less but i'm going to be naming her lincoln after my favorite cartoon character lincoln loud from the loud house it's a cartoon that aired back in 2016 and it's still airing now too it's on nickelodeon btw!
November 29, 2022

Let us know what you think of Lincoln as a dog name!