Traits associated with the name Goofy:

Dogs named Goofy tend to be good-natured, and loving. This name is also associated with friendship, and companionship.

Is Goofy a good dog name?

Goofy has two syllables, which is highly recommended by dog trainers. The name also ends in a vowel sound, so it's easy for dogs to recognize. Goofy isn't one of the most common names, so your dog will certainly stand out. If you love the name, you should pick it!

Goofy is found in these categories:

Goofy is not a popular dog name. That's great if you like to stand out from the crowd!

Get special treats for Goofy! 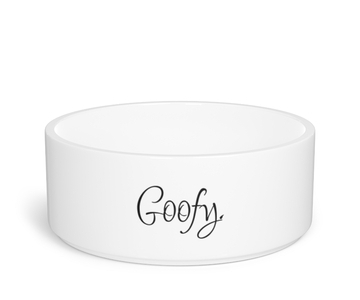 Gala
A festive celebration.
Go-go
Full of energy and vitality. a mod 1960s discoteque the whisky a go-go.
Genie
(Islam) an invisible spirit mentioned in the Koran and believed by Muslims to inhabit the earth and influence mankind by appearing in the form of humans or animals
Geo
Farmer Or Location
Gizmo
Another word for gadget.
Goldie
Made Of Gold
See more...

Got a dog named Goofy?

Let us know what you think of Goofy as a dog name!