move down on as if in an attack

Traits associated with the name Pounce:

Dogs named Pounce tend to be good-natured, and loving. This name is also associated with friendship, and companionship.

Is Pounce a good dog name?

Pounce is a one-syllable dog name, making it short and snappy. The name also ends in a vowel sound, so it's easy for dogs to recognize. Pounce isn't one of the most common names, so your dog will certainly stand out. If you love the name, you should pick it!

Pounce is found in these categories:

Pounce is not a popular dog name. That's great if you like to stand out from the crowd!

Get special treats for Pounce! 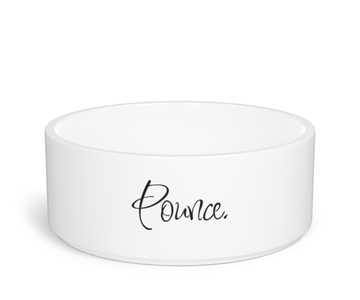 Pip
a mark on a die or on a playing card (shape depending on the suit)
Pearl
Smooth, Round Bead Formed By A Mollusk
Pixie
Fairy
Peppy
Full of drive and fast on the pickup.
Pronto
Spanish for quickly or immediately.
Puck
a vulcanized rubber disk 3 inches in diameter that is used instead of a ball in ice hockey
See more...

Got a dog named Pounce?

Let us know what you think of Pounce as a dog name!