The wife of the hero odysseus in greek mythology

Dogs named Penelope tend to be strong-willed, good-natured, industrious, and affectionate. This feminine name is also associated with intelligence, and companionship.

Penelope has more syllables than most dog names, but you can easily give your pup a nickname to shorten things. The name also ends in a vowel sound, so it's easy for dogs to recognize. Penelope isn't one of the most common names, so your dog will certainly stand out. If you love the name, you should pick it!

Penelope is found in these categories:

Naming your dog Penelope is certainly a thing, but it's one of the more niche choices out there according to our data.

Get special treats for Penelope! 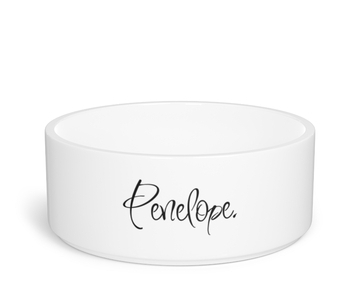 Phoebe
A titan goddess with the gift of prophecy in greek mythology
Amelia
Woman to fly across atlantic ocean.
Chloe
Daphnis and chloe, is an ancient greek novel
Olivia
A detective from the show law and order svu
Penny
A computer book.
Polly
Latin american for a bitter lady
See more...

Got a dog named Penelope?

Let us know what you think of Penelope as a dog name!