From Donald or Donovan; brown, chief or noble.

Dogs named Donnie tend to be good-natured, industrious, and loving. This name is also associated with companionship.

That you have a sense of humor and enjoy giving your pets unique names. It could also suggest that you have an affinity for the 1980s.

Donnie has two syllables, which is highly recommended by dog trainers. The name also ends in a vowel sound, so it's easy for dogs to recognize. Donnie isn't one of the most common names, so your dog will certainly stand out. If you love the name, you should pick it!

Donnie is found in these categories:

Donnie is not a popular dog name. That's great if you like to stand out from the crowd!

Get special treats for Donnie! 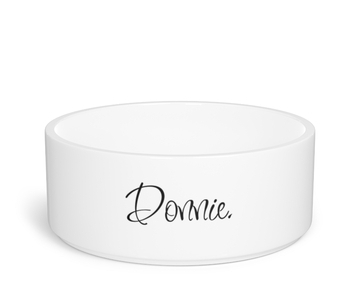 Davy
English chemist who was a pioneer in electrochemistry and who used it to isolate elements sodium and potassium and barium and boron and calcium and magnesium and chlorine (1778-1829)
Dudley
From the people's meadow
Dexter
Right-handed, skilled
Duffy
Descendant of Dubhthach
Dusty
Diminutive of Dustin, meaning brave warrior.
Digby
From The Farm At The Ditch
See more...

Got a dog named Donnie?

Let us know what you think of Donnie as a dog name!