Champ has a fun sound to it, and represents a down-to-earth owner who doesn't take life too seriously.

Dogs named Champ tend to be good-natured, industrious, loving, and brave. This name is also associated with companionship.

Champ is a one-syllable dog name, making it short and snappy. Champ isn't one of the most common names, so your dog will certainly stand out. If you love the name, you should pick it!

Champ is found in these categories:

Naming your dog Champ is certainly a thing, but it's one of the more niche choices out there according to our data.

Get special treats for Champ! 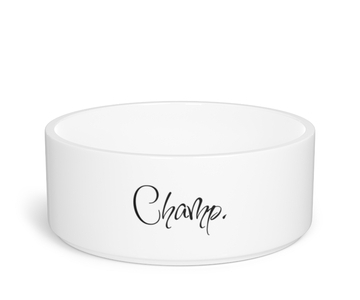 Chance
Fortune, Luck
Charlie
Free man
Clyde
The name of a Scottish river; means "the keeper of the keys".
Chase
Skilled hunter or huntsman.
Chip
A word short for a chipset, or a splinter. Also the diminutive form of Charles.
Duke
Leader, commander, governor of a province
See more...

Got a dog named Champ?

🇺🇸
Dash (California, United States)
Champ does not mean to chew loudly. I think you got it confused with "Chomp".
January 01, 2022

Let us know what you think of Champ as a dog name!