Dogs named Milo tend to be strong-willed, good-natured, loving, and brave. This name is also associated with intelligence, and companionship.

Milo has two syllables, which is highly recommended by dog trainers. The name also ends in a vowel sound, so it's easy for dogs to recognize. Milo is a widely loved dog name for good reason. If you like it, go for it!

Milo is found in these categories:

Milo is one of the more popular dog names out there. According to our data, Milo outranks the great majority of names.

Get special treats for Milo! 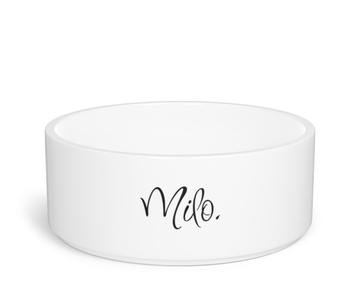 Max
Greatest
Benji
Son Of My Right Hand
Murphy
Descendant of a sea warrior
Mickey
Who Is Like God?
Miles
Soldier or servant
Monty
Mountain belonging to the ruler
See more...

Got a dog named Milo?

🇨🇱
Francisca (Santiago Metropolitan, Chile)
Happy With Our New Member ❤️ I hope you like your name MYLO 😍🐩
September 05, 2022 ◆ Translated

🇺🇸
Ady (Florida, United States)
Milo today Sun, June 5th arrived at our house he will be loved by all he is a cute baby chihuahua 💕 with brown spots and we will always love him for sure he loves his name
June 05, 2022 ◆ Translated

Let us know what you think of Milo as a dog name!