The military trains everything we expect to see in our dogs: strength, loyalty and discipline. If you've got a larger, more powerful breed, try these military dog names on for size!

Staying on the military theme, these names mean soldier or are in some way related to the word.

As of February 2023, military dog names seem increasingly popular with new puppy owners. Our stats show that they are more fashionable than they were six months ago.

A pup lover from Hauts-de-France, France 🇫🇷 browsed a list of German Wirehaired Pointer Names.
less than a minute ago

A dog whisperer from Departamento de San Salvador, El Salvador 🇸🇻 browsed a list of Food Dog Names.
less than a minute ago

A pup lover from Hauts-de-France, France 🇫🇷 browsed a list of German Spitz Names.
1 minute ago

A dog whisperer from Piura, Peru 🇵🇪 browsed a list of Guard Dog Names.
1 minute ago

Someone from Bogota D.C., Colombia 🇨🇴 browsed a list of Doberman Pinscher Names.
1 minute ago 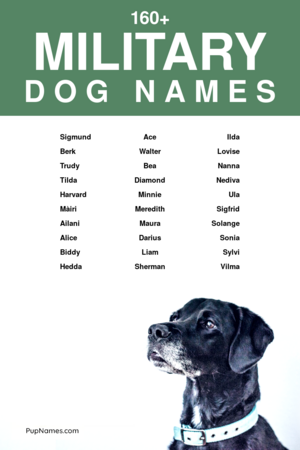 Let us know what you think of these military dog names!