The ocean brings calming and healing energy to all of us, including dogs. Show your love for surf, beach and the sea by giving your dog one of these ocean dog names.

Staying on the ocean theme, these names mean water or are in some way related to the word.

Love chilling on the beach? These beach dog names will make you and your dog feel like you're lying by the ocean waves sipping on a mojito.

As of December 2022, ocean dog names seem increasingly popular with new puppy owners. Our stats show that they are more fashionable than they were six months ago. 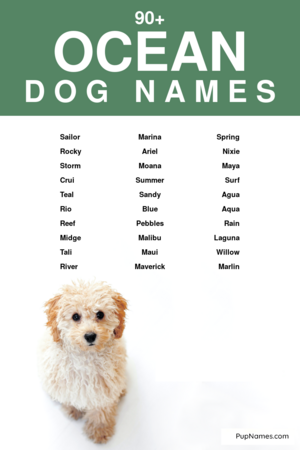 Let us know what you think of these ocean dog names!