Baxter has a strong, powerful sound to it that highlights a dog's strength of character.

Dogs named Baxter tend to be good-natured, and loving. This name is also associated with intelligence, and companionship.

Baxter has two syllables, which is highly recommended by dog trainers. Baxter is a widely loved dog name for good reason. If you like it, go for it!

Baxter is found in these categories:

Baxter is one of the more popular dog names out there. According to our data, Baxter outranks the great majority of names.

Get special treats for Baxter! 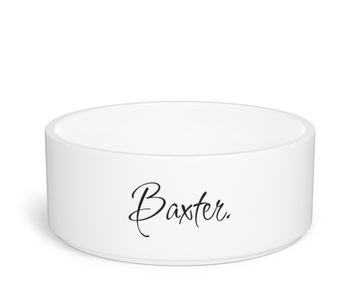 Benji
Son Of My Right Hand
Beau
Handsome
Bingo
A game in which numbered balls are drawn at random and players cover the corresponding numbers on their cards
Barkley
Birch tree meadow
Brady
Descendant Of Bradach
Milo
Soldier, or merciful
See more...

Got a dog named Baxter?

🇺🇸
Monica Hammerschmidt (Illinois, United States)
My German Shepherd just turned 6 months. I named him Baxter and I love it. So does he!
August 17, 2022

Let us know what you think of Baxter as a dog name!