Dogs named Balto tend to be strong-willed, good-natured, affectionate, and loving. This name is also associated with companionship.

Naming your dog Balto suggests that you have an appreciation for history and a fondness for heroic stories. Balto was a famous sled dog who led a team of sled dogs on a mission to deliver medicine to a remote town in Alaska during a diphtheria epidemic in 1925. His story has been immortalized in books, movies, and statues.

Balto has two syllables, which is highly recommended by dog trainers. The name also ends in a vowel sound, so it's easy for dogs to recognize. Balto isn't one of the most common names, so your dog will certainly stand out. If you love the name, you should pick it!

Balto is found in these categories:

Balto is not a popular dog name. That's great if you like to stand out from the crowd!

Get special treats for Balto! 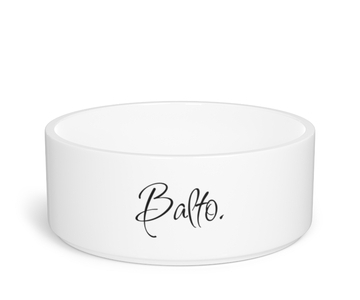 Beau
Handsome
Benji
Son Of My Right Hand
Bingo
A game in which numbered balls are drawn at random and players cover the corresponding numbers on their cards
Baja
Lower, either in elevation or geography.
Barkley
Birch tree meadow
Baxter
Baker
See more...

Got a dog named Balto?

🇨🇷
Balto (Provincia de Guanacaste, Costa Rica)
Without a doubt, I love this dog, he is very playful, loving, he loves to have his tummy comforted, he does not allow other animals to enter his territory and he is very intelligent, apart from that, he is very eater. I love this Belgian Malinois
November 25, 2022 ◆ Translated

🇪🇨
(Provincia de Pichincha, Ecuador)
my dog is called because he is pretty and like his father may he rest empas
August 18, 2022 ◆ Translated

🇳🇴
Emma (Rogaland, Norway)
I love ny dog and his bane is Balto he is A reallly strong boy bur caring.
July 28, 2022

🇻🇪
Balto Carrito (Miranda, Venezuela)
They watered it for me one car per stall. They were very happy at home
July 23, 2022 ◆ Translated

Let us know what you think of Balto as a dog name!