Still need a name for your pup? Here's a list of dog names beginning with L.

All Dog Names Starting With L

As of May 2022, dog names starting with l seem increasingly popular with new puppy owners. Our stats show that they are more fashionable than they were six months ago.

Luna is the most popular name, having received more likes than any other in this list of dog names starting with l.

Someone from Massachusetts, United States 🇺🇸 browsed a list of Independent Dog Names.
less than a minute ago

Someone from Massachusetts, United States 🇺🇸 browsed a list of White Dog Names.
less than a minute ago

Someone from Hesse, Germany 🇩🇪 browsed a list of Energetic Dog Names.
less than a minute ago

A dog whisperer from Hesse, Germany 🇩🇪 browsed a list of Fluffy Dog Names.
1 minute ago 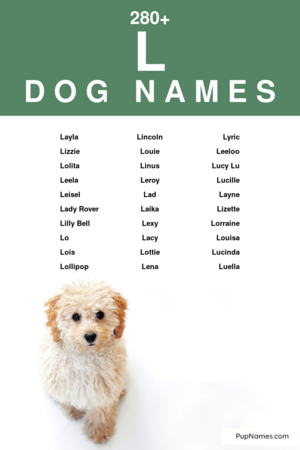 Let us know what you think of these dog names starting with l!