fasten by sewing; do needlework

Dogs named Stitch tend to be good-natured, affectionate, loving, and brave. This name is also associated with companionship.

Naming your dog Stitch suggests that you have a creative and playful side. It could also suggest that you have a fondness for Disney movies, as Stitch is a character from the movie Lilo & Stitch.

Stitch is a one-syllable dog name, making it short and snappy. Stitch isn't one of the most common names, so your dog will certainly stand out. If you love the name, you should pick it!

Stitch is found in these categories:

Stitch is not a popular dog name. That's great if you like to stand out from the crowd!

Get special treats for Stitch! 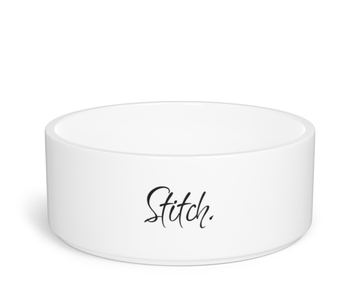 Bolt
Explosive leap forward or upright; the action of a rifle.
Sam
Short Form Of Samuel Or Samantha
Shiloh
His Gift
Skip
To move in a light springy manner. to escape secretly in haste.
Sparky
An electrician
Spike
Stingy or pointed.
See more...

Got a dog named Stitch?

🇺🇸
Ritamarie ( Capogreco) Smith (New York, United States)
We adopted Stitch at the SPCA, the owner was declining with memory so his family gave Stitch over to SPCA. I was confused with this name so I googled for some info, and he did fill this description. He knows his name but rest assured, he is calm, curious, listens to me, guards, and a famous part of Disney! My firsts own understands was Stitch’s meaning was, he makes you laugh, a “stitch,” a good and great guy to have around, quiet but also comic relief! I’ll take two please! Lol
August 13, 2022

Let us know what you think of Stitch as a dog name!