Dogs named Meeko tend to be good-natured, loyal, loving, and hard-working. This name is also associated with companionship.

Meeko has two syllables, which is highly recommended by dog trainers. The name also ends in a vowel sound, so it's easy for dogs to recognize. Meeko isn't one of the most common names, so your dog will certainly stand out. If you love the name, you should pick it!

Meeko is found in these categories:

Naming your dog Meeko is certainly a thing, but it's one of the more niche choices out there according to our data.

Get special treats for Meeko! 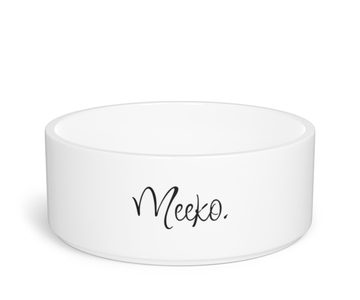 Mickey
Who Is Like God?
Mowgli
Boy in the jungle book
Marty
Servant Of Mars, God Of War
Milo
Soldier, or merciful
Monty
Mountain belonging to the ruler
Morty
Dead sea, or a stagnant lake
See more...

Got a dog named Meeko?

🇺🇸
Sherry K (Ohio, United States)
We named our male sheepadoodle Meeko, like the raccoon from Pocahontas. It is Native American and means “little mischief.” Definitely perfect for our little pup!
June 29, 2022

🇺🇸
Debbie Lux (Texas, United States)
I just rescued a Alaskan Husky a week ago and Meeko is the name I gave him.
March 06, 2022

Let us know what you think of Meeko as a dog name!