From The Meadow Dwelling

Dogs named Dallas tend to be good-natured, industrious, loving, and brave. This feminine name is also associated with companionship.

That you have an affinity for the city of Dallas, Texas. It could also suggest that you have a strong sense of loyalty and are looking for a companion who will be a faithful friend.

Dallas has two syllables, which is highly recommended by dog trainers. Dallas isn't one of the most common names, so your dog will certainly stand out. If you love the name, you should pick it!

Dallas is found in these categories:

Dallas is not a popular dog name. That's great if you like to stand out from the crowd!

Get special treats for Dallas! 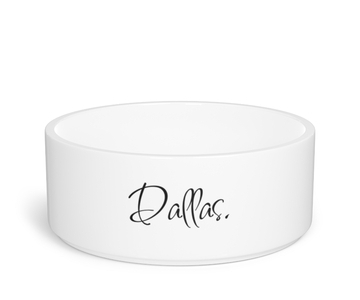 Daisy
Day's eye. The petals of a daisy open during the day, revealing its yellow centers, and then close at night.
Daphne
The very intelligent character from scooby doo
Darla
Dear, Loved One
Delia
Person From Delos
Diva
A moody princess
Dixie
From The South In The U.S.
See more...

Got a dog named Dallas?

Let us know what you think of Dallas as a dog name!