The name Ozzy is extremely charming for boys, and we've noticed its popularity accelerating with dog owners.

We love this name because of its fun, modern sound, while the connection to traditional names like Oscar and Oswald keeps it classy and elegant.

Did you know that The Beatles' lead guitarist George Harrison once had a dachshund called Ozzy? A nice splash of historical glamour on an already fantastic dog name.

Dogs named Ozzy tend to be good-natured, industrious, affectionate, and loving. This name is also associated with intelligence, and companionship.

Ozzy has two syllables, which is highly recommended by dog trainers. The name also ends in a vowel sound, so it's easy for dogs to recognize. Ozzy isn't one of the most common names, so your dog will certainly stand out. If you love the name, you should pick it!

Ozzy is found in these categories:

Naming your dog Ozzy is certainly a thing, but it's one of the more niche choices out there according to our data.

Get special treats for Ozzy! 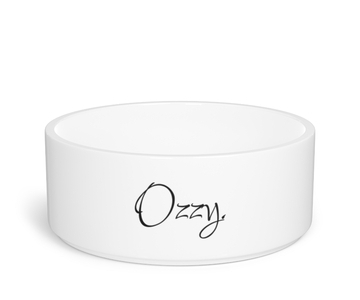 Got a dog named Ozzy?

🇺🇸
Taylor (Washington, United States)
I think my dog has a geart name for Ozzy
June 22, 2022

🇹🇹
sar (Port of Spain, Trinidad and Tobago)
i named my maltipoo ozzy. everything mentioned about the traits associated with the name ozzy is quite accurate.
February 24, 2022

🇺🇸
Tiffany (Nevada, United States)
My 11 year old Chihuahua is named Ozzy, and you got this info spot on! Including the top breed and personality. Good job!
January 18, 2022

🇺🇸
Emily (Somwhere in the world )
It is a very nice dog name and I am thinking of naming my new puppy that
October 16, 2021

Let us know what you think of Ozzy as a dog name!