Short For Names Beginning With K

Dogs named Kiki tend to be strong-willed, good-natured, and loving. This feminine name is also associated with companionship.

Kiki has two syllables, which is highly recommended by dog trainers. The name also ends in a vowel sound, so it's easy for dogs to recognize. Kiki isn't one of the most common names, so your dog will certainly stand out. If you love the name, you should pick it!

Kiki is found in these categories:

Naming your dog Kiki is certainly a thing, but it's one of the more niche choices out there according to our data.

Get special treats for Kiki! 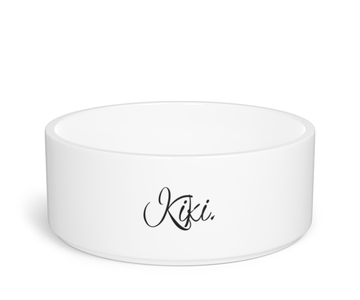 Got a dog named Kiki?

🇬🇧
Emily (England, United Kingdom)
I love the names Kiki so much!! I named my puppy Kiki and it suits her perfectly! I adopted her from a lovely breeder as she has swimmers syndrome so can’t walk. If I hadn’t adopted her she would have been put down!! Kiki is now 4 weeks old and living her life to the fullest. That is an opinion on the name from a dog owners perspective. I am also a dog trainer. I train many dogs and love to play with them as well. The name Kiki is great as it only has two syllables which means that it can very clearly be heared by your dog and understood. Also the name is great as it is very unique so can stand out amongst other dogs names being called. Kiki if a fabulous name and if you like it then call you little canine conpanion it!!!
July 18, 2022

🇨🇦
Sarah Grant (New Brunswick, Canada)
I live in NB, Canada and we have a dog named Kiki. I picked it out but no particular reason besides thinking it was cute. She's a mix breed with about 6 different breeds.
March 04, 2022

Let us know what you think of Kiki as a dog name!