Dogs named Gordy tend to be good-natured, loving, brave, and hard-working. This name is also associated with companionship.

That you have a sense of humor and enjoy giving your pets unique and creative names. It also suggests that you are a fan of classic films, as Gordy is the name of the main character in the 1993 movie "Gordy".

Gordy has two syllables, which is highly recommended by dog trainers. The name also ends in a vowel sound, so it's easy for dogs to recognize. Gordy isn't one of the most common names, so your dog will certainly stand out. If you love the name, you should pick it!

Gordy is found in these categories:

Gordy is not a popular dog name. That's great if you like to stand out from the crowd!

Get special treats for Gordy! 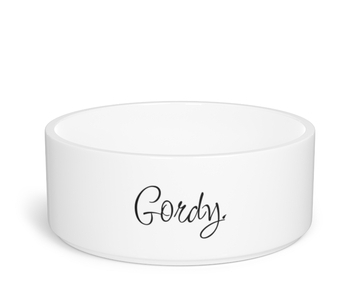 Grady
Descendant of the noble or illustrious one
George
Farmer, worker of the Earth
Goose
Water bird with a long neck; slang for a foolish person.
Gerry
Spear ruler
Gordo
Fat or chubby person.
Groucho
United States comedian; one of four brothers who made motion pictures together (1890-1977)
See more...

Got a dog named Gordy?

Let us know what you think of Gordy as a dog name!